Given the origin of my site something like this post might seem kind of random, but I enjoy plants and cooking so this is certainly not going to be the last time I do something like this. I'm going to try being more active with posts, and that of course means a higher likelihood that a given reader may either enjoy or not enjoy what I pick to write about.

I'm growing shiso (紫蘇, Perilla frutescens var. crispa) in pots this year and intend to use their leaves for as many different recipes as I can find or think of. Despite being such a simple herb, it is very versatile and is a good pick for showcasing a wide variety of uses. I want to document the process of growing my seeds in pots as well as some of the recipes I end up making. If you're new to cooking or planting then maybe we'll learn together, and if you're experienced with either feel free to judge my efforts.

To begin I'll throw together some basic history and use cases of shiso, but first I'd like to say I hope all of the cyberpunks, hackers, NEETs, and/or webmasters that check in here occasionally have a great summer and take plenty of time to go out into meatspace and get some sun.

I'll just copy some existing references to not pretend as if I have any interesting insight into some random herb. From wikipedia:

> Red shiso (赤紫蘇, akajiso) is used in the process of making umeboshi (pickled plums) to give the plums a red color. The leaves turns bright red when steeped in umezu, the vinegary brine that results as a byproduct of pickling plums.

> Green shiso is called aojiso (青紫蘇) or ōba (大葉 "big leaf"). It is used to garnish dishes, to be battered on one side and fried to make tempura, or chopped to flavor any number of fillings or batter to be cooked, for use in warm dishes.

The following couple of quotes come from an article on shiso on a website called japanese-wiki-corpus.

> At the end of the Later Han Dynasty, a young man from Luoyang city ate too many crabs and suffered from food poisoning. He was going to die, but Hua Tuo, a good doctor prepared a decoction from herb and made some purple medicine. The young man took the medicine and recovered immediately. The herb medicine was '紫' (purple) and '蘇る' (recover) then it was called 'Shiso' (紫蘇 lit. purple recovery).

> It originally came from the Himalayan mountains, Myanmar, China, and so on. In Japan, it's considered that shiso was introduced from China. It is a genus of annual herb about one meter high. The leaves are opposite phyllotaxis, oval-shaped, acuminate, and tinged in green or red. Some species have crisp leaves. They have many white or purple flowers arranged in racemose inflorescence.

A great list by a blog called "Chocolate & Zucchini" lists 43 things to do with fresh Shiso that I will certainly be taking lots of ideas from.

I bought my seeds from a shop called Gaea's Blessing according to the little envelopes. The back of them specify some instructions on how to prepare the seeds for successful growth. 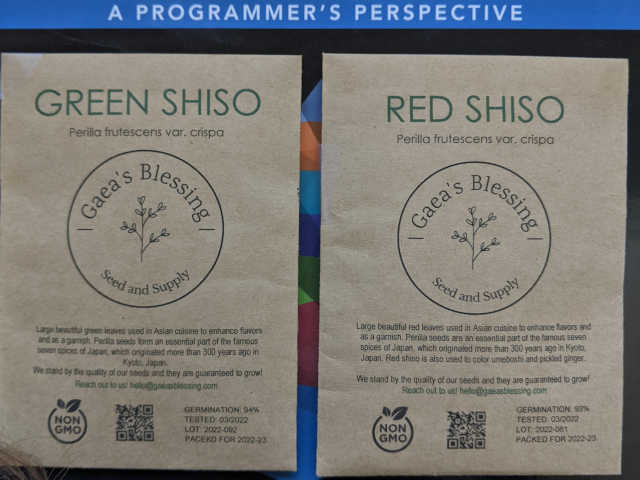 > TIPS: Start outdoors after the last frost or when night temps are above 45F in moist but well-drained soil. Plant 1/4" deep but cover very thinly. Germination takes place at 68F. Cold stratify before planting to break dormancy and improve germination - mix seeds in moist sand and refrigerate for a week, then soak in water for 24 hours before planting. Thin plants to 8-12" 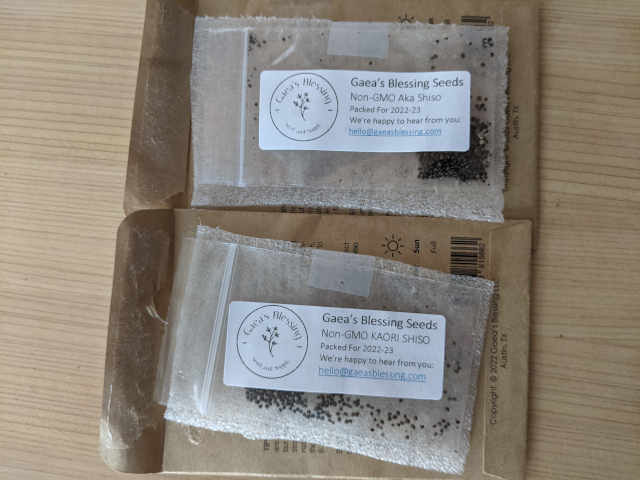 > Cold stratification is an important step for cold-tolerant plant seeds to break their dormancy in order to germinate. This process helps ensure germination success and consistency.

> In order to break dormancy and get the seeds ready for spring germination, they need to be exposed to cold temperatures. This cold treatment, over an extended period, actually breaks down the growth inhibitor within the seed or the hard seed coat outside of the seed, allowing them to germinate once the conditions are suitable.

I'm going to proceed with the instructions from the package, so that means 24 hours of soaking them in warm water, followed by a week in the fridge.

I put some generic play sand I could get ahold of in small glass containers, and put the tiny seeds in each one. I'm growing both red and green shiso, so I made sure not to combine them or mix up the containers by mistake. In hindsight I probably put way too many seeds in each, but I was worried that I wouldn't have enough should some of them be duds or something. 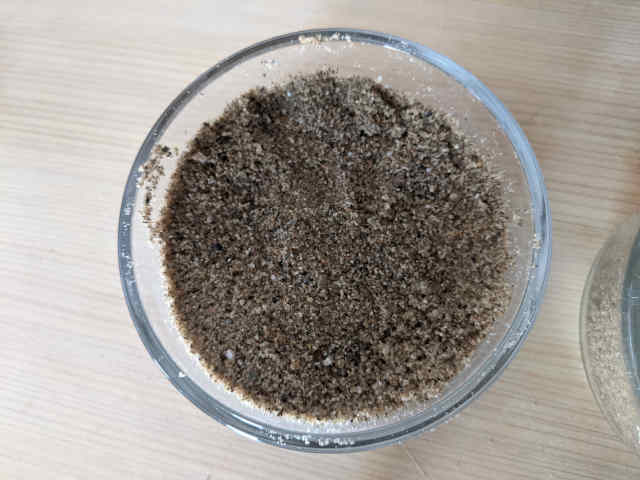 I also put too much sand in the containers, but I made sure not to bury the seeds very deep in them so I can easily scoop the top layer of sand out once they're ready. Next, I put them in my refrigerator for a week.

Soaking Before Germination (May 14th)

After the week in the fridge, I filled the containers with enough water to submerge the sand. You can kind of see in the photo that the seeds can float while any sand/rocks do not, so getting them out should not be difficult. 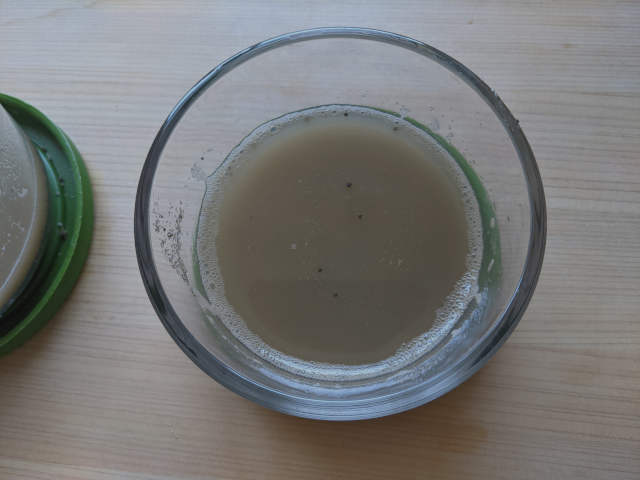 Planting in Pots (May 15th)

After a day of soaking it's time to plant. The pots I have available to use are a couple white plastic pots that measure 29.5cm or 11.61" across at their widest point. I filled each with an entire 13.2L or 12 dry qt. bag of seed starting mix soil. According to the package it's a combination of peat moss, coconut coir, and vermiculite. The BEST Mix the the BEST Results! Well I can't argue with such confidence.

I used my finger to indent shallow holes around the soil for sprinkling the seeds in. Indeed, the fact that the seeds can sort of float after you stir the sand around with a finger makes getting the seeds out easier. At this point I had already scooped out the top layer of sand and replaced it back into the containers to make up for having overfilled them.

I definitely planted too many seeds in each pot. It's hard to stop even when I know it's too many. I just feel bad for the ones I'd leave out! I used a label maker on each pot so I wouldn't forget which was green and which was red. 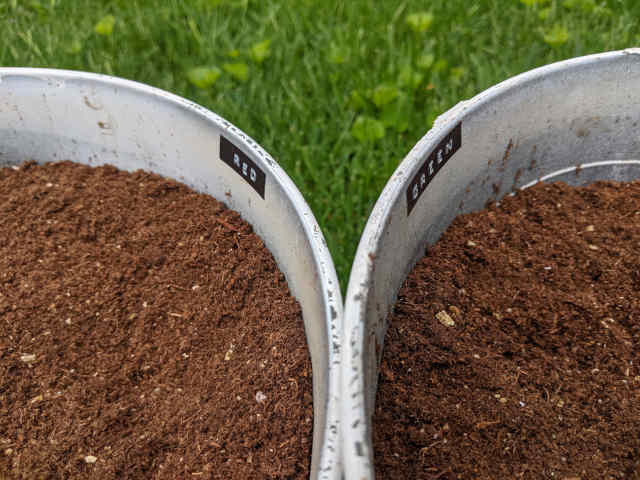 May 25th, 10 days after planting, and the first sprouts have arrived! Well before the 14-21 day estimate on the package. There seem to be four sprouts in the green pot, but no red shiso sprouts yet. 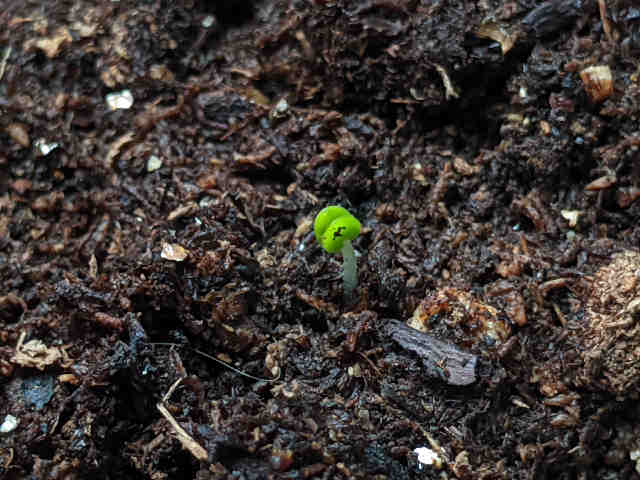 In one of the first nights I was able to leave the pots out, the dirt in the green shiso pot seemed to have been scattered around a bit. Not sure if it was an animal of some kind or the wind but it did concern me at the time. The label for that pot is also missing, maybe buried in the dirt somewhere. I wonder if this has to do with why the seeds are all coming up in the same area.

May 26th, and the green shiso count has now about doubled. Seems to be around 8-9 little sprouts to my count. Most of them are growing in one area which is a little concerning but will continue as is. The older of the sprouts seem to have the beginnings of an extra set of leaves growing from their center. 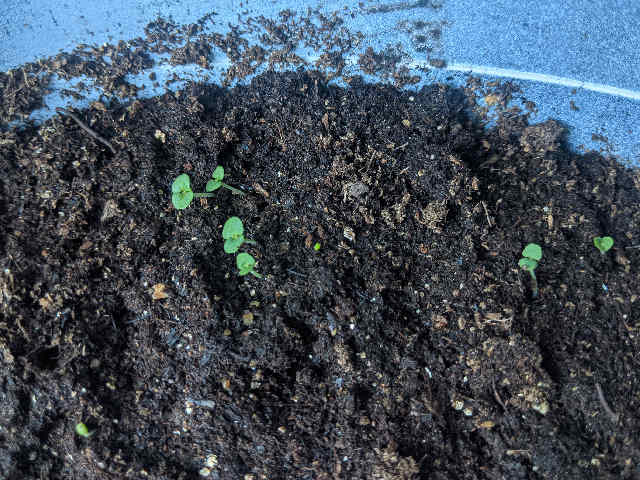 June 2nd, the leaves growing from the center of the green shiso sprouts are really starting to take shape. Pretty cute honestly. 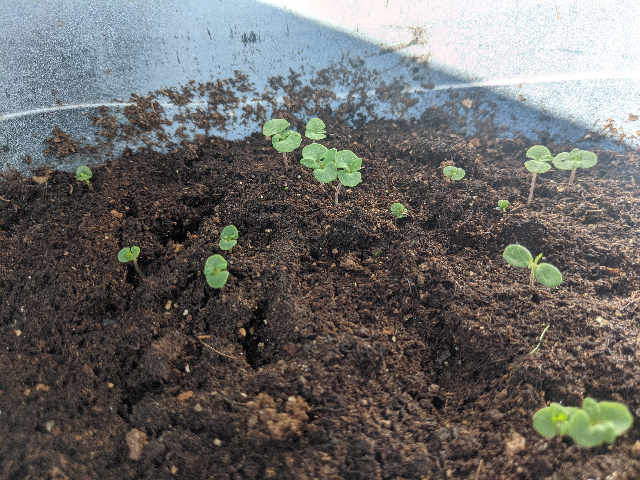 June 5th, the red shiso sprouts are now starting come along. And with a much more even density too compared to the green sprout pot. 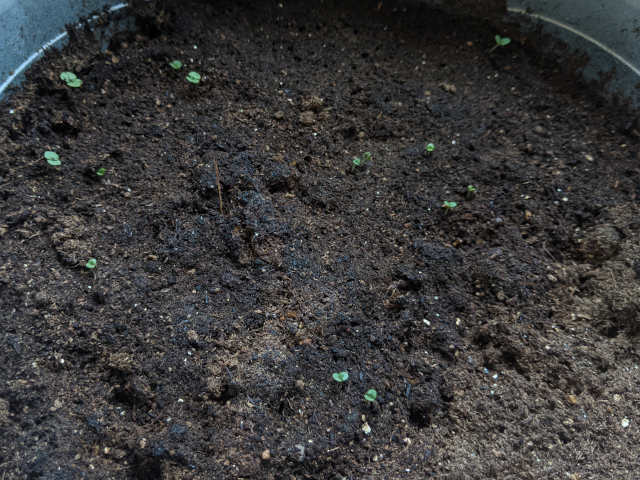 The green sprouts leaves are getting bigger by the day! I may be taking too many photos, though.. 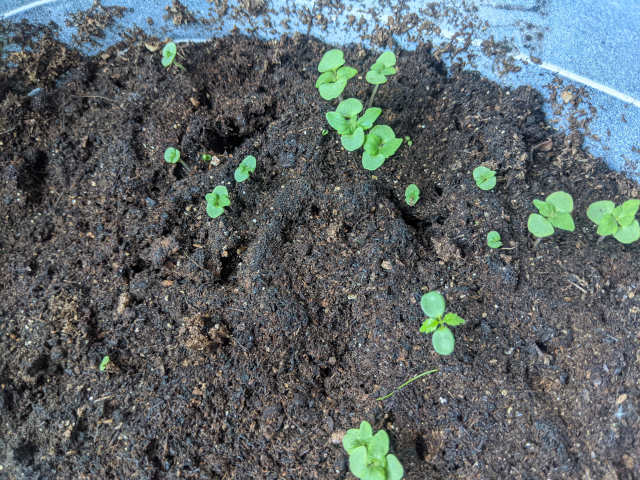