I'm going to try to do all of the Advent of Code programming/algorithm challenges this year. I'm not a particularly good programmer, but I do currently have plenty of free time, so my current plan is put in as much time as I need or can stand into finishing the challenges everyday. My current primary study focus is C so I am planning to do all of them in C after I first do them in Python as quickly as I can.

I've been reading the book "Algorithmic Thinking" lately which has been helpful for me as an introduction to the terminology and problem solving steps of solving algorithmic challenges. It's a C-based book which is good because ultimately I want to get more comfortable at reading and writing in C.

I'll be posting and hanging around in the /aocg/ threads, so I'll post my time command results with the provided inputs as well as the big boy inputs posted in the threads. Archivist Anon is back this year and is collecting the input files and code submissions from the threads. 198336 and 993406 seem to be the two primary private leaderboards.

I think I'm going to include my solutions in this post, but even if I don't keep up with doing that I also have a git repo where all of them will be kept and updated.

UPDATE (Dec 4): I starting making a calendar on /g/ since no one else had started a very good one yet. Not sure if I'll follow it through, but hoping other anons use it as a template.

UPDATE (Dec 27): I didn't finish the calendar, because it was never my intention to make OC for each day, but rather to curate the OC posted in the thread into a calendar. Since no one was really making any, and what was being made wasn't great (my own included), it just didn't get finished. Hopefully someone else takes the reins next year. I only did this year because no one else was as I had said before. I'll do it again if no one else is, but it's kind of stressful to deal with because most people in the threads just end up complaining and arguing about the content anyway. I remember there was a lot of drama in 2020 about it which I was trying to avoid. 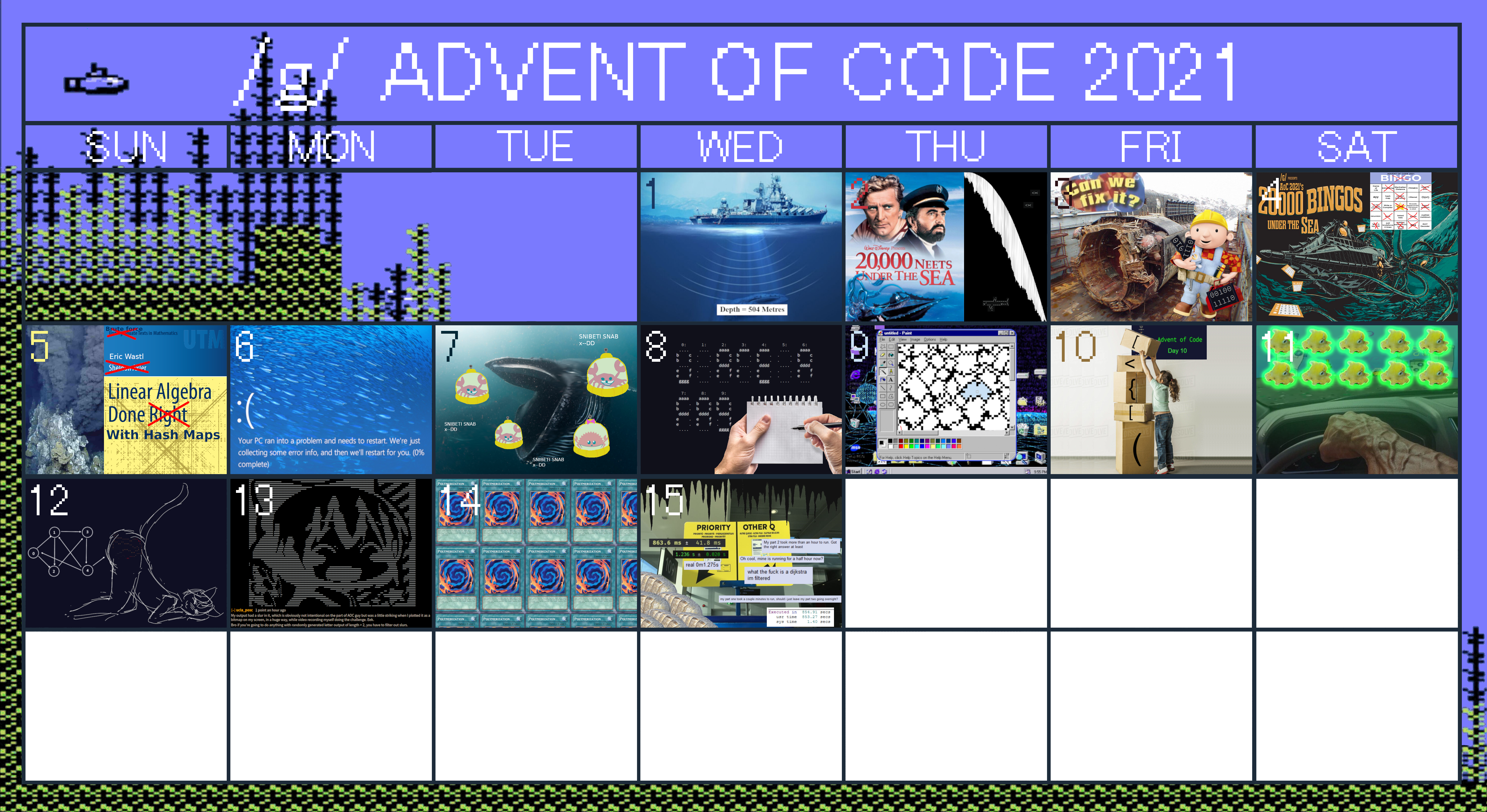 The month ending is bittersweet, because I really enjoy "showtime" each night and the hectic push for solving the problem each day. The issue is, I really suck at this! As expected, I was beginning to really struggle half-way through the month due to lacking a lot of fundamental skills needed for doing the later problems. The difficulty progression this year felt quite weird as it went from consistently easy (but still time consuming for me personally) problems to tedious and difficult problems abruptly towards the end of the month. Then there would randomly be a day like 17 and 23 that were uncharacteristically easy before going back to difficult the next day.

Something I've discovered is that once I get behind at all there's a good chance I won't catch up. This month seriously impacted my ability to sleep, and I have been constantly sleep deprived. I need to make sure I can do each problem in a single day or else falling behind and getting to overwhelmed to catch up is inevitable. My biggest goal for AoC next year is simple: study and practice enough to be able to do easier challenges in about/under an hour, and more difficult challenges in about/under two hours. This should be adequate for not destroying my ability to sleep for the whole month while not being unrealistic.

Part of my self-study routine over the next year is going to include topics that AoC has highlighted my failure to be able to do. There's two kinds of problems that can be described in that way:

The first category I intend on learning through the following books:

For the second category I'm less sure what to do. My current plan is to just go through competitive programming/puzzle books instead of going deep in theory, because the topics are less applicable to what my core interests are, so I don't want to waste time learning them in depth just for a few AoC problems at the end of the year. My current ideas are this:

Additionally, some online resources I've been recommended for getting better at these algorithmic puzzles include Kattis, Rosalind's Algorithmic Heights and Bioinformatics Armory problems, Red Blob Games tutorials, and the resources given by betaveros in a blog post about AoC.

At this point, if I want a better education on algorithms then I can either turn to the legendary "Learning Algorithms" book, which given the knowledge obtained from the above resources, should be more approachable if I wanted. Some books Anons have recommended me or that I've found online and set aside include "Dynamic Programming and Optimal Control", "Dynamic Programming for Computing Contests", "3D Math Primer for Graphics and Game Development", and "Computational Geometry". I'm not currently planning on going through any of these necessarily, but are worth keeping in mind if I want to.

Dynamic programming and the use of recursion is one of the things I struggled with the most this month that I consider to be important to understand better than I do in particular.

My primary goal this year of doing the problems in C very quickly fell short, because for the first part of the month I considered figuring out how to interpret input to be more difficult than the problems themselves. As I learn C, which as I said will be my primary focus for 2022, I do want to be able to do challenges like this in it as well, but it become clear very quickly that I started off the month over-estimating my ability to do these challenges, so doing them in C on top of trying to do them at all was not going to happen, unfortunately.

Also kind of random, but some anon in the /aocg/ has inspired me to attempt to pick up Awk in my spare time next year, and if I do I might also do them in Awk as well. It would just be for fun, so there's a good chance I'll change my mind, but it's something I'm going to consider.

I still intend on coming back to problems I missed, and likewise I plan on doing some of the previous years too for practice. I don't plan on updating this post as I do, but my git repo will continue to be updated. I also plan on making a personalized Python library while I do the previous years so I can save time on some implementation details next year when going for speed. The source for that will also be in the git repo as I work on it. Updates to my study process will likewise not be in this post but in my "Path To Competence" post.

Hope anyone else reading this who did these challenges did a better job of it than me, and I look forward to trying again next year.